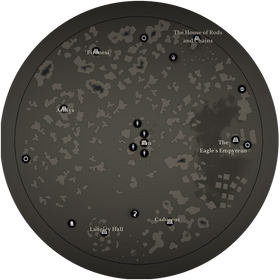 A possible chart of Eleutheria

Eleutheria is one of the four regions in the High Wilderness. It’s dark, deadly and terrifyingly beautiful.

This region is not necessarily any more dangerous than the Reach or Albion, but can be unforgiving. You are more likely to find a number of hostile creatures all at once, and there are fewer ports. Further, unlike the other regions you can't repair your ship for Sovereigns in the central port.

From the Reach[edit | edit source]

A transit permit costs 800 Sovereigns; alternately, you can barter for one with three loads of Ministry-Approved Literature and two Visions of the Heavens. The transit permit will be inherited by other captains of your lineage.

Once you have a transit permit, each trip to Eleutheria will cost you either a Savage Secret or two Caddies of Dried Tea. As always when traveling through a relay, Customs will search your engine for Contraband.

There is no relay from Albion to Eleutheria. However, an extremely wealthy captain might wish to sink a fortune into building one.

Once you have visited Eleutheria, the next time you visit London you will encounter The Insistent Surveyor. Provided you are equipped with an Assaying device, she will want to be transported to Duskings Deep, where she will begin building The Albion to Eleutheria Transit Relay. This is an extremely expensive project, as detailed on its dedicated page, but once the relay is completed your captain will be able to travel from Albion to Eleutheria, or vice versa, for free. The rest of their lineage will need to pay, but it's affordable; either 5 Sky-Stories or 200 Sovereigns.

Unlike the hubs of other regions, Eleutheria's central port, Pan, does not have a standard repair shop. However, there is an option to trade an Eleutherian Mystery to repair half of your Hull damage.

Eagle's Empyrean, however, does have an ordinary repair shop, but since the port is not centrally located it's far easier to seek Pan out first.

Between visits to Eagle's Empyrean, your hull may be repaired by scavenging after fights and investigating the many wrecked ships littering Eleutheria's skies. Many ships and monsters will leave behind scraps that can be used to fix your engine, though sometimes at the cost of Terror, and often wrecks may be stripped for repairs.

Many encounters in Eleutheria will raise your terror, whether while looting after a battle or while exploring interesting discoveries.

Most of Eleutheria's ports offer both fuel and supplies. The exceptions are Caduceus, which offers only supplies, and Piranesi, which offers neither fuel nor supplies.

Leaving Eleutheria is more difficult than going there: the Reach Transit Relay to Eleutheria is one-way and deposits you at a broken relay.

To the Reach[edit | edit source]

The working Eleutheria-Reach Transit Relay is found near Eagle's Empyrean. Each trip to the Reach costs your choice of either three Carefully-Packed Crates of Munitions or 200 Sovereigns. If you forgot to bring munitions from the bank in Pan, you can pick some up at the Blue Heaven Arsenal in Eagle's Empyrean for 60 Sovereigns apiece--thus, munitions are always a better deal unless you simply don't have room to carry them.