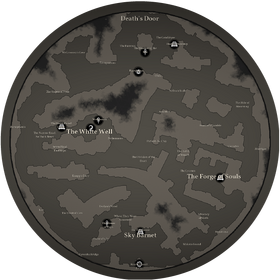 A chart of The Blue Kingdom

The Blue Kingdom is one of the four regions of the High Wilderness. It is still ruled by a sun, and inhabited by the dead.

The Blue Kingdom is the smallest region in the game, but also the most challenging, and should only be attempted by high-level Captains with very well-equipped ships. There are a number of new, difficult opponents which will try to attack you, but that isn't the only reason to leave the Blue Kingdom until you're ready for it. The Blue Kingdom can be very frustrating to navigate, because of it s unique bureaucracy. Your Blue Kingdom Status limits which ports you can interact with, and you will need to spend expensive resources just to work the system or bend the rules to even get encounters. What's more, you can't buy Supplies in the Blue Kingdom. The only sustenance there is petrichor, the food of the dead, which will keep you alive but incurs a potentially hefty penalty upon leaving the Kingdom. And finally, there are relatively few trade opportunities in the Blue Kingdom.