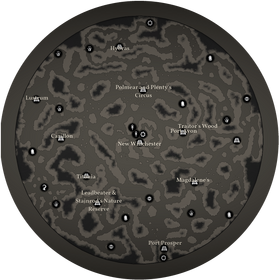 A possible chart of The Reach

The Reach is one of the four regions in the High Wilderness. It was the first region introduced, and is where new Captains will begin.

The Reach is an untamed region that Albion has begun to colonize. Long ago, it was ruled and carefully cultivated by a Judgement known as The Garden-King, but upon his death, it grew wild and dangerous. Despite the lack of a sun, The Reach still remains lit thanks to an abundance of luminous plants and fungi.

After London's conquest of Albion, it looked to The Reach to expand its frontiers. The Parzifal, the first locomotive to pass through the Avid Horizon, was sent on an expedition to chart The Reach, but was never seen again. This did not deter the British, however, and after the establishment of Port Prosper and its Transit Relay, the region was soon awash with agents of the Empire-backed Windward Company, settlers seeking a fresh start, and miners in search of new sources of hours. The early settlement of New Winchester at The Reach's core rapidly grew into the region's de facto capital, and additional Transit Relays transformed it into a hub linking Albion to Eleutheria and The Blue Kingdom.

Unfortunately, the euphoria of claiming a new land eventually gave way to political frictions as the settlers began to disagree about The Reach's future. The Windward Company and supporters of Her Enduring Majesty, the Stovepipes, wanted The Reach to remain part of the New British Empire, while numerous independence-minded settlers, the Tacketies, wanted to establish a new, egalitarian state, free of Albion's dreaded workworlds and the crushing apathy of its bureaucracy. These tensions exploded into open conflict over control of New Winchester and The Reach that became known as the Winchester War. Following a series of bloody, large-scale locomotive battles, both sides fell into a stalemate. With the outcome of the war unclear, skirmishes between the Stovepipes and Tacketies continue throughout the region apart from New Winchester, which serves as a neutral ground that, for the time being, hosts both the headquarters of Windward Company and the Tacketies' Colonial Assembly.